In all the doom and gloom talk surrounding the low price of oil these days, there has been little talk of the upside, aside from lower prices for consumers at the gas pump. Shouldn’t there be some sort of bright side? Didn’t Newton say something about equal and opposite reactions? Should that apply here? I don’t know; I’m not a scientist. However, I am here to spread some cheer because, in fact, there is at least one good side to oil prices hitting rock bottom. Let’s take a look at this silver lining of the current oil and gas market downturn.

According to NPR, “Low oil prices are squeezing all parts of the industry — even the black market. Oil theft off the coast of West Africa has fallen, and analysts say low oil prices mean piracy is no longer profitable.”

That’s right. Pirates no longer view oil as a commodity worth fighting or pirating for. Piracy in the Gulf of Guinea dropped 29% from 2014 to 2015.

Bolaji Akinola, an industry analyst for the West African maritime industry told NPR, “Since the price dropped, there has been a decline in piracy and the numbers are there. The low oil price is a deterrence. It’s not much of a worthwhile venture any longer.”

However, Akinola did also concede that the decrease in piracy can also be attributed to increased reporting and patrolling by authorities.

“Certainly, there are other reasons. The first other reason is the setting up of the Maritime Piracy Reporting Centre under the Gulf of Guinea Commission. What that has done is to enable vessels to report incidents of attacks. And the other key reason has been increased patrol by the navies of the countries in the Gulf of Guinea region,” Akinola said.

Unfortunately, Akinola said the decrease in oil theft might lead to an increase in other types of piracy. 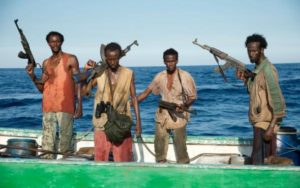 “Now they are kidnapping crew members and then holding them for ransom, the kind of piracy that we saw in the Somalia area, in the Gulf of Aden. In fact, in February, they targeted the…vessel with the aim of taking one or two crewmembers hostage and then asking for ransom,” Akinola said.

I guess we’re back to that equal and opposite reaction stuff. Science…